Arriving in Rome by car

All roads lead to Rome—and certainly every highway sign in Italy, eventually, points you in this direction.

Renting a car in Rome

For the most part, you definitely want to rent a car before you arrive through a discounter such as Auto Europe (www.auroeurope.com). You’ll pick up the car at the office of one of the major rental agencies, which all have offices in and around Stazione Termini and at the airports. There are links to this and other resources to find the cheapest car rentals under “Useful links” below.

However, there is also one nice little service in Rome called Happy Rent (Via Piave 49, tel. 06-4202-0675; www.happyrent.com), which runs tours and rents vintage Vespas and Italian mini-cars, such as an Alfa Romeo Spider convertible or everyone’s favorite cute-as-a-bug (and about the same shape and size) Fiat 500.

One plea: As you will see below, it is foolish and counterproductive to try and get around Rome itself by car. You really do not want a car in the city.

If, however, you do plan to rent a car for some of your Italy trip—the best way to see the smaller hilltowns and vineyards and such—heed this tip.

If you are starting your trip in Rome, wait until your last day in Rome—the day you set out into the countryside—to pick up the car from a downtown rental office. This will not only save you the cost of renting (and additional cost of garaging) the car for those days you are in Rome not even using it, but also avoids the added airport pick-up fee. Nifty.

If Rome happens to be the last stop on your trip and you are flying home from Rome, drop off that rental car the instant you drive into town and spend those final days in the capital blissfully car-free.

The first thing you hit when driving into the Rome is the G.R.A., which stands for Grande Raccordo Annulare (but is usually just pronounced “Grah”) and means “Great Ring Road”—a multi-lane (and often elevated) highway etching a rough circle around the city’s outer suburbs.

The idea is that, unless your destination within the city is on the same side of town as the direction from which you’re arriving, you get on this heavily trafficked bypass and zip around so you can come into town from the most useful direction for you.

Everything is pretty well signposted, but, as is usually the case in any big, congested, tangled-up city with more cars than common sense (which describes pretty much any town with a population of more than 3,000), it’s difficult to navigate unless you already know what you’re doing—a bit of a catch 22 for visitors.

Exits come up and then whip past often before you’re prepared for them, so the best advice is to stick to the far right lane so you can grab your exit before you miss it.

Driving in Rome in an exercise in controlled insanity, and should not be attempted by anyone.

OK, so it’s not that bad, but it is chaotic, frustrating, and intensely stressful.

Romans, it is often said, drive like maniacs, but this isn’t entirely true.

The other half are merely driving extremely aggressively and according to Italian traffic laws and norms, to which you simply are not acccustomed.

Rome is not a city you want to drive in.

There simply is no street parking in the historic center, and everything you want to see you can get to by foot or on public transportation (mostly by bus, a little by Metro/subway).

I will be brutally blunt: Driving into Rome when you first arrive, or out of it when you are ready to leave: that’s fine. It is a necessary evil.

But anyone who decides to drive around Rome for sightseeing purposes is an idiot.

My advice: If you do arrive by car, fight your way to your hotel garage or a public lot (detailed below), dispose of the car as quickly as possible, and spend your time in Rome blessedly car-free.

(Similarly, if you are planning to rent a car for part of your Italy vacation—perhaps to visit hilltowns of Tuscany en route to Florence —arrange to pick up your rental car on your last day in Rome and use it only to drive out of the city.)

The ZTL—Where you CANNOT drive in downtown Rome 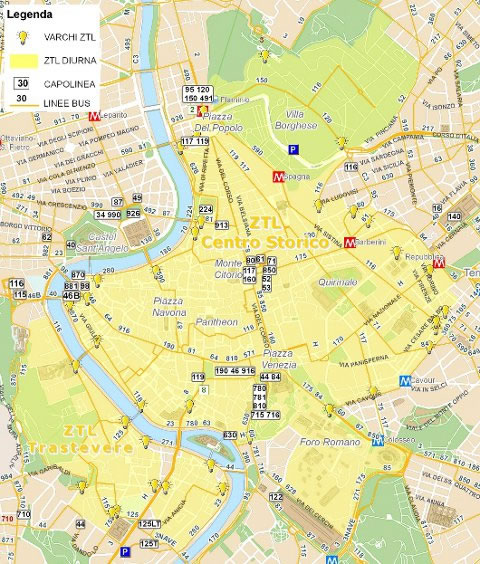 Rome has instituted several ZTL (“Zona Traffico Limitato”), a traffic camera-survielled area of the historic center where you are not allowed to drive without either having a resident’s pass or registering your car with the police as a tourist (your hotel will do this for you, but you must give them your license plate number them the instant you check in).

The two main daytime ZTLs are the Centro Storico and Trastevere.

The “centro storico” in this case runs roughly: from Piazza del Poplo in the north around the south side of the Villa Borghese park. It then zig-zags south through the Via Veneto neighborhood (it looks odd, but many downtown car rental offices are in this area and they’re leaving access to them). The zone continues down Via Torino, just west of Termini, then turns southwest along Via Cavour, then southeast the Forum on Via dei Fori Imperiali and around the back of the Colosseum to Via di San Gregorio. It turns back northwest up Via de Cerchi between the Cirsus Maximus and Palatine Hill, tucking in to provide a little notch of driveable streets just west of the Forum, then heads straight west to the Tiber River (which forms the western edge of the ZTL all the way back up to Piazza del Popolo). See the map below to the right.

(At night, the ZTL extends to include the Testaccio, San Lorenzo, and Monti neighborhoods.)

Best solution: Just park in a public garage (see the next section) and don’t bother trying to drive into a ZTL. It’s way more hassle than it’s worth.

Your hotel might have a garage or an arrangement with one (though it will be expensive—on the order of €30 to €50 a day), or you might be lucky enough to be staying in one of the few forgotten scraps of the historic center that hasn’t yet been designated a zona blu—most of the city’s parking spaces have been painted with blue stripes, meaning you must pay a parking meter (often a box at the end of the block; you feed it coins—usually €1 an hour—and it gives you a slip to leave on the dashboard).

The biggest public garage is the Parcheggio Borghese (tel. +39-06-322-5934, www.sabait.it) under the Villa Borghese park in the northeast corner of town. Its entrance is on Viale del Muro Torto, which leads off into the park from the traffic circle at Porta Pinciana (the gateway through the ancient brick wall at the top of Via Veneto).

This garage is open 24 hours. Rates run €2.20 per hour, or €18 per day. Though a bit tricky to find (its entrance is a sudden turn off a fast-paced commuter road near a spagheti-worthy tangle of an intersection), it is by far the best option in the center of town, and where I usually park when I find myself with a car in Rome.

Way cheaper—€2 for 12 hours, or €3 for 16, plus €2 to leave it overnight (so just €5 per day total)—is to park in one of the massive Parcheggio di Scambio commuter lots at suburban train stations (www.atac.roma.it; tel. +39-06-57-003), open 6am to 10pm. There are 30 of these lots, so chooe whichever is most convenient for the direction from which you are coming, or pick one of the three (relatively) central lots:

Rome: To and from Fiumicino Airport (FCO)